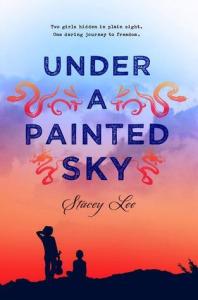 Book: Under A Painted Sky by Stacey Lee

Where I Got It: borrowed the hardcover from the library

Missouri, 1849: Samantha dreams of moving back to New York to be a professional musician—not an easy thing if you’re a girl, and harder still if you’re Chinese. But a tragic accident dashes any hopes of fulfilling her dream, and instead, leaves her fearing for her life. With the help of a runaway slave named Annamae, Samantha flees town for the unknown frontier. But life on the Oregon Trail is unsafe for two girls, so they disguise themselves as Sammy and Andy, two boys headed for the California gold rush. Sammy and Andy forge a powerful bond as they each search for a link to their past, and struggle to avoid any unwanted attention. But when they cross paths with a band of cowboys, the light-hearted troupe turn out to be unexpected allies. With the law closing in on them and new setbacks coming each day, the girls quickly learn that there are not many places to hide on the open trail.

This beautifully written debut is an exciting adventure and heart-wrenching survival tale. But above all else, it’s a story about perseverance and trust that will restore your faith in the power of friendship.

I really liked Under A Painted Sky!  As much as I love history, I don’t read a lot of historical fiction, and pretty much every single time I read it, I always wish I read more of it.

Under A Painted Sky initially came across my radar because I follow a few blogs that focus on diversity in books, but I was really intrigued by the story.  I’m really glad I read it, because it’s such a great story about friendship and people who accept you no matter what.

I really liked Sam- she’s definitely a survivor, and I can’t imagine what it must have been like for her.  It was the same with Annamae.  I loved how they looked out for each other, and how bonds can form, even in horrible circumstances.  I loved that they were so accepting, and that they became close with a group of cowboys who were awesome.  I instantly cared for Sam and Annamae, and I also came to care about the cowboys and even Sam’s dad, even though we didn’t see a lot of him.  Sam missed him, and that made me miss him.  I also really liked how connected Sam was to her Chinese heritage, and how we saw the Chinese Zodiac and Chinese folklore throughout the book.

Really, West, Cay and Peety are quite awesome too.  I LOVED how accepting they were of Sam and Annamae, and how strong their bond was.  It really does stand out, and both girls trying to hide the fact that they were girls disguising themselves as boys made for some really funny moments.  It’s normally something that irritates me (and I have no idea why) but it worked really well in this book. because the Oregon Trail is dangerous enough as it is, much less for two girls on the run.

It was the characters and their journey that really stood out and shined in Under A Painted Sky.  They definitely had obstacles, and adventures but their actual journey across the Oregon Trail…it was part of the book, and how their friendship got strong, but Under A Painted Sky is really more about the characters than the plot.  Don’t get me wrong, there’s some action-packed scenes throughout the book, and even though the Oregon Trail is an awesome setting (and now it makes me want to play the game), I found it didn’t really matter that much to me.  Still, you definitely feel like you’re on this epic road-trip, Old West style.

4 stars.  I didn’t fall in love with it, but everyone needs to read it!  It’s such an amazing book about friendship and hope.