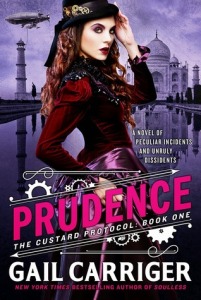 Where I Got It: I own the hardcover (signed) and the e-book

When Prudence Alessandra Maccon Akeldama (Rue to her friends) is given an unexpected dirigible, she does what any sensible female would under similar circumstances – names it the Spotted Custard and floats to India in pursuit of the perfect cup of tea. But India has more than just tea on offer. Rue stumbles upon a plot involving local dissidents, a kidnapped brigadier’s wife, and some awfully familiar Scottish werewolves. Faced with a dire crisis and an embarrassing lack of bloomers, what else is a young lady of good breeding to do but turn metanatural and find out everyone’s secrets, even thousand-year-old fuzzy ones?

I really liked Prudence!  Which wasn’t that surprising, because Carriger’s books are so much fun but I do admit to taking my time with it because I wanted to make sure I was enjoying the book and actually able to focus on it, instead of just speeding through just to get through it.

This series focuses on Alexia’s daughter Rue, who seems to get into as much trouble as her mom, and it was fun seeing Rue grown-up and off to India and have her own adventures.

Especially in her own dirigible named The Spotted Custard that looks like a ladybug!  I can picture it really well, but I also wish it were illustrated, because that would be pretty awesome.  I also really liked that we saw a paranormal world beyond England (and even Egypt), because you only see England, and Egypt doesn’t come until the end of the Parasol Protectorate.  So it was nice to see what it’s like for the paranormal set in India and how different it is than England.  I’m hoping we see more of the paranormal world outside of England, because now I’m all curious about it!

Rue is definitely different than her mom- I think partly because of Dama, and maybe part rebellion?  And I love that she and Prim are best friends, the way their moms are best friends.  And I really liked seeing random characters from her other books make appearances throughout the book.  It makes me wonder who we’ll see next!  I’m glad that they only make the odd appearance, because it is Rue’s story, and I liked that we got to see more of Rue and what she was up to.