Book Review Round-Up is a series of posts I started to talk about the books I’ve been reading and want to talk about.  The idea was inspired by a weird reading funk I’ve been in.  Enjoy!

Book #1: The Truth About Alice by Jennifer Mathieu 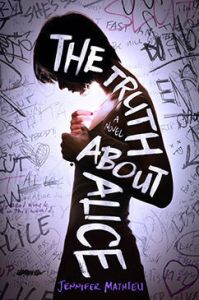 Source/Format: borrowed the e-book from the library!

What It’s About: Everyone knows Alice slept with two guys at one party. When Healy High star quarterback, Brandon Fitzsimmons, dies in a car crash, it was because he was sexting with Alice. Ask anybody.  Rumor has it Alice Franklin is a slut. It’s written all over the “slut stall” in the girls’ bathroom: “Alice had sex in exchange for math test answers” and “Alice got an abortion last semester.” After Brandon dies, the rumors start to spiral out of control. In this remarkable debut novel, four Healy High students tell all they “know” about Alice–and in doing so reveal their own secrets and motivations, painting a raw look at the realities of teen life. But in this novel from Jennifer Mathieu, exactly what is the truth about Alice? In the end there’s only one person to ask: Alice herself.

What I Thought:  I thought The Truth About Alice was just okay.  I was intrigued by it, since I’ve seen it floating around, and decided to give it a read.  I do like that it’s a different take on slut-shaming and bullying, and that you see how other people see Alice.  And I really like how Mathieu plays with the stereotypes- the popular girl hosting the party (Elaine), the former best friend (Kelsie), the best friend of the guy who died in a car accident because of Alice (Brandon), and the nerd who has a crush on Alice and is the only person willing to talk to her (Kurt).  These are the people who tell Alice’s story before we finally hear from Alice herself at the end of the book.  I found myself hating pretty much all of the characters (except for Kurt who is pretty awesome, and Elaine, the popular girl because at least she owned it).  I feel like we don’t really get to know who Alice really is, because we pretty much see her through the eyes of other people.  It makes me wish we got more than one chapter at the end of the book from her perspective.

I kind of don’t blame her for not speaking up (at least that we see) because I’d probably do the same thing in her position.  It is sort of frustrating, but her classmates also seem like the sort of people who wouldn’t care what really happened, if they’re anything like Elaine, Kelsie and Brandon.  While the idea of multiple narrators was interesting, especially given that we don’t really see Alice’s side, something about it didn’t completely work for me.

Rating: 2 stars.  It was just okay, and it was an interesting way to tell a story that also didn’t work as well as it could have.

Book #2: Everything Leads To You by Nina LaCour 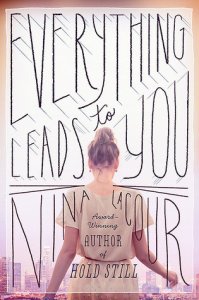 What It’s About: A love letter to the craft and romance of film and fate in front of—and behind—the camera from the award-winning author of Hold Still.

A wunderkind young set designer, Emi has already started to find her way in the competitive Hollywood film world.

Emi is a film buff and a true romantic, but her real-life relationships are a mess. She has desperately gone back to the same girl too many times to mention. But then a mysterious letter from a silver screen legend leads Emi to Ava. Ava is unlike anyone Emi has ever met. She has a tumultuous, not-so-glamorous past, and lives an unconventional life. She’s enigmatic…she’s beautiful. And she is about to expand Emi’s understanding of family, acceptance, and true romance.

What I Thought: Everything Leads To You is one of those books that everyone seems to love, and while I liked it, I didn’t love it.  I liked the mystery of the letter from a John Wayne-type of character, and how it led to Ava.  Their romance didn’t quite work for me, just because it seemed like Emi was just into Ava to figure out the mystery and everything that happened when Ava was little.  But I still liked that is was a whirlwind of a romance and you could tell they cared for each other, and that love is love, no matter who it is you love really came through.  I loved that Emi was so interested in set design, and she seems to be doing well in the field, considering how young she is.  It really is a good summer book, but with all of the set design and film stuff, it was slightly hard for me to connect with it as a book…but I do think it would be great as a movie or t.v. show.

It is a cute, quick read, so if that’s what you’re looking for, this is a book definitely worth checking out.

Rating: 3 stars.  It is cute, and I loved Emi’s love of set design, and the connection to a silver-screen legend. 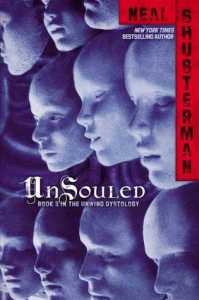 What It’s About: Connor and Lev are on the run after the destruction of the Graveyard, the last safe haven for AWOL Unwinds. But for the first time, they’re not just running away from something. This time, they’re running toward answers, in the form of a woman Proactive Citizenry has tried to erase from history itself. If they can find her, and learn why the shadowy figures behind unwinding are so afraid of her, they may discover the key to bringing down unwinding forever.

Cam, the rewound boy, is plotting to take down the organization that created him. Because he knows that if he can bring Proactive Citizenry to its knees, it will show Risa how he truly feels about her. And without Risa, Cam is having trouble remembering what it feels like to be human.

With the Juvenile Authority and vindictive parts pirates hunting them, the paths of Connor, Lev, Cam, and Risa will converge explosively–and everyone will be changed.

What I Thought: I really liked Unsouled!  It really is a good addition to the series, and I feel like each book reveals more about this world and how unwinding came into being.  I liked seeing the chapters focusing on the people who came up with the science behind unwinding, and how it was help, not be the the thing that started an entire industry…and how the thing that would mean unwinding would end was hidden and destroyed because it would mean that entire industry would be destroyed. It is definitely something that you can see happening today, and I think it’s something that will always be relevant to whatever’s going on.

I also really like all of the different perspectives you see in the book, and it’s something that’s done really well. You see all of the different sides of what’s going on, and it really makes what’s going on even more interesting and really adds to what’s happening.  I really loved a connection to UnWind, and there is one part of it that makes so much more sense now that we have some more pieces to the puzzle.  Everything really is starting to fall into place, and I can’t wait to see how it all ends.

Rating: 4 stars.  I didn’t love it but I still really liked it because it makes you think so much!