Book review round-up is a new feature, where I talk about a few of the books I’ve been reading.  It was inspired by a weird blogging/reading funk I’ve been in, and this is the 2nd one!

Book #1: Mine Till Midnight by Lisa Kleypas 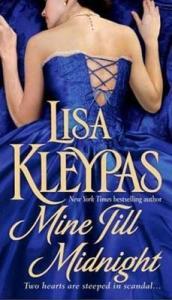 What It’s About: When an unexpected inheritance elevates her family to the ranks of the aristocracy, Amelia Hathaway discovers that tending to her younger sisters and wayward brother was easy compared to navigating the intricacies of the ton. Even more challenging: the attraction she feels for the tall, dark, and dangerously handsome Cam Rohan.

Wealthy beyond most men’s dreams, Cam has tired of society’s petty restrictions and longs to return to his “uncivilized” Gypsy roots. When the delectable Amelia appeals to him for help, he intends to offer only friendship—but intentions are no match for the desire that blindsides them both. But can a man who spurns tradition be tempted into that most time-honored arrangement: marriage? Life in London society is about to get a whole lot hotter…

What I Thought: I thought Mine Till Midnight was okay.  I really felt like there wasn’t any chemistry between Amelia and Cam, and it was hard to root for them and care about their happily ever after.  I so did not feel it between them. That’s pretty much it, because I really can’t recall anything else.

Rating: 2 stars.  Pretty much because I didn’t feel it between Amelia and Cam.

Source/Format: borrowed from the library

What It’s About: Zach, Alice, and Poppy, friends from a Pennsylvania middle school who have long enjoyed acting out imaginary adventures with dolls and action figures, embark on a real-life quest to Ohio to bury a doll made from the ashes of a dead girl.

What I Thought: I thought Doll Bones was okay.  If I were in elementary school or middle school, I’d probably love the adventure but it didn’t quite work for me.  I think because one of them was way more into imaginary adventures than the other two, and it seemed weird that no one would notice a few kids wandering around by themselves for a while. I know they need to in order to fulfill their quest, but something about it made it hard to get into.  It is clear that there’s a very established story in the world they created, and that is a story I’d love to read…it seems much more interesting than the three kids growing out of their imaginary adventures.  But I do think some people will like it, even if it wasn’t for me.

Rating: 2 stars, for reasons I mentioned above.

Book #3: The Truth About Air And Water by Katherine Owen

Source/Format: I own the e-book!

What It’s About: They share an epic love but one moment changes everything. A life together that seemed certain is shattered. One learns you never love the same way twice; the other learns what it means to come home. You only think you know how this love story goes, but do you really know how an epic love can end?

What I Thought: I am so glad that there’s a sequel to This Much Is True!  I really liked seeing what was going on with Tally and Elvis, and even though things were rough for them, like really rough, they did get through it.  And I really hope that there’s another book, because I feel like their story is far from over.  It definitely stands on its own, and even though you don’t need to read the first book in order to know what’s going on in this book, I think it’s a really good idea to read the first one in order to fully get how much these two have been through.  It has more of an impact when you understand everything that’s happened.  And I just loved it, and it was heart-breaking but not heart-breaking and angsty the way This Much Is True was.  I don’t know if it’s because of the weird reading funk I’ve been going through, but it didn’t hit me emotionally the way I thought it was.

Rating: 5 stars for being such a great story, and for keeping their story…very true to them, and who they are as a couple and as people.