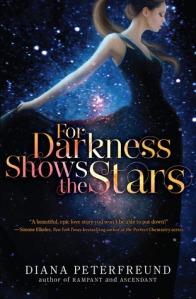 Book: For Darkness Shows The Stars by Diana Peterfreund

Where I Got It: checked out the e-book from the library!

Series: For Darkness Shows The Stars #1

Check out For Darkness Shows The Stars on goodreads

It’s been several generations since a genetic experiment gone wrong caused the Reduction, decimating humanity and giving rise to a Luddite nobility who outlawed most technology.

Elliot North has always known her place in this world. Four years ago Elliot refused to run away with her childhood sweetheart, the servant Kai, choosing duty to her family’s estate over love. Since then the world has changed: a new class of Post-Reductionists is jumpstarting the wheel of progress, and Elliot’s estate is foundering, forcing her to rent land to the mysterious Cloud Fleet, a group of shipbuilders that includes renowned explorer Captain Malakai Wentforth–an almost unrecognizable Kai. And while Elliot wonders if this could be their second chance, Kai seems determined to show Elliot exactly what she gave up when she let him go.

But Elliot soon discovers her old friend carries a secret–one that could change their society . . . or bring it to its knees. And again, she’s faced with a choice: cling to what she’s been raised to believe, or cast her lot with the only boy she’s ever loved, even if she’s lost him forever.

Inspired by Jane Austen’s Persuasion, For Darkness Shows the Stars is a breathtaking romance about opening your mind to the future and your heart to the one person you know can break it.

I liked For Darkness Showed The Stars.  It was a little hard to get into at first, with the letters and then the story.

I really liked the letters, because it really showed how different Elliot and Kai were, and how much they didn’t know about each other’s worlds.  I like that you see them throughout the book and how things changed for them and between them over time.

It was a little weird at first, because you know something has happened between them, but you’re not quite sure what, until the end of the book.  It’s been several years since I’ve read Persuasion, so while I can’t tell you how good of a re-telling it is, I still think it’s something Jane Austen fans would really like!  From what I have re-read so far, and from what I vaguely remember, it is better than a lot of other re-tellings.  Even if you haven’t read Persuasion, it holds up well on its own.

For me, I really wish I had re-read Persuasion first, because I felt like I was missing something.  I think it’s because I have read it before, and for me, I think I would have liked it more if I had those details fresh in my mind.  That is weird for me, because generally I’m movie first/book second kind of person.  Since we’re talking about re-tellings, though, I guess you could say I’m a re-telling first, original second kind of person, but in this case, I finished the book feeling wishing I had read Persuasion first.

I did get the sense that Peterfreund is very, very familiar with Persuasion.  There is a Jane Austen feel to this book, and it’s a book that brings old-fashioned and modern together very well.  While I know the book is set sometime in the future, it’s unclear as to how far away this future is from us.  But things have regressed to the point that technology is seen as bad, and things like medicine and clothes go back to an older time. It’s understandable, given everything that has happened.

There was something very futuristic and dystopic about this book, and you’d think it wouldn’t go with some of the more old-fashioned aspects of the book, but they go so well together!

I loved that Elliot was so caring and compassionate and how much she wanted to protect all of the people working on her estate.  She wanted to do the right thing, and she had a lot of opposition from her father, who was just horrible.  I was very much reminded of plantations and slavery, and how everyone really was a product of their environment.

Overall, the descriptions of the estate and characters were pretty generic, and I wish things were described more.  But at the same time, it’s something I can see happening in so many different places if this were to happen.   Still, it very much felt like the U.S. South.  Which is fine, but I think I’m just curious about the general area where it takes place and how it relates to what is going on in the rest of the world.

I’m not sure how I feel about Kai and Elliot.  I get why Kai acts the way he does, but I couldn’t like him in this book.  I just couldn’t.  I just couldn’t believe in (or care about) the romance when there were so many other things going on.

And I thought the book ended randomly and kind of abruptly.  I really wanted more resolution, but as it’s the first in a series, the lack of resolution isn’t too surprising.  Still, I wish it had a little more resolution than it did.