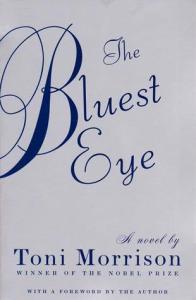 Where I Got It: checked out the e-book from the library!

Check out The Bluest Eye on goodreads

Pecola Breedlove, a young black girl, prays every day for beauty. Mocked by other children for the dark skin, curly hair, and brown eyes that set her apart, she yearns for normalcy, for the blond hair and blue eyes that she believes will allow her to finally fit in.Yet as her dream grows more fervent, her life slowly starts to disintegrate in the face of adversity and strife. A powerful examination of our obsession with beauty and conformity, Toni Morrison’s virtuosic first novel asks powerful questions about race, class, and gender with the subtlety and grace that have always characterized her writing.

I liked The Bluest Eye, and I felt like this one, more than any of the other books I’ve read (except for Home) was about…life.  The one thing that I keep noticing with Morrison is that I pay much more attention to the writing than the actual story.  It’s weird, because the actual writing is something I almost never pay attention to.

But with Morrison, it’s all I seem to pay attention to, and The Bluest Eye is no exception. There are several different narrators of The Bluest Eye, and they all come together to tell the story of Pecola.  Honestly, it took me a while to realize that there were several different stories of some of the people in Pecola’s life, and I found myself having to go back and re-read certain parts of the book, because it was starting to not make sense to me.  It’s definitely one of those books that you have to read carefully.

I did like reading The Bluest Eye after reading some of her other books, because her writing style- which has grown and changed- is still relatively the same.

While I only liked the story (and found the narration to be a bit all over the place), it’s hard to not like The Bluest Eye. Morrison really does know how to tell a story.  The Bluest Eye gets 3 stars.