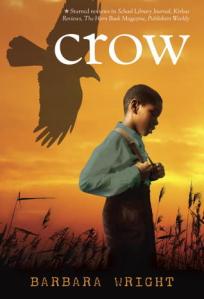 Where I Got It: from audible.com

The summer of 1898 is filled with ups and downs for 11-year-old Moses. He’s growing apart from his best friend, his superstitious Boo-Nanny butts heads constantly with his pragmatic, educated father, and his mother is reeling from the discovery of a family secret. Yet there are good times, too. He’s teaching his grandmother how to read. For the first time she’s sharing stories about her life as a slave. And his father and his friends are finally getting the respect and positions of power they’ve earned in the Wilmington, North Carolina, community. But not everyone is happy with the political changes at play and some will do anything, including a violent plot against the government, to maintain the status quo.

One generation away from slavery, a thriving African American community—enfranchised and emancipated—suddenly and violently loses its freedom in turn of the century North Carolina when a group of local politicians stages the only successful coup d’etat in US history.

I am so glad I listened to Crow!  I didn’t even know that there were race riots in Wilmington in 1898, or that it was the only successful coup d’etat in U.S. history, and I really want to know more!

What I really like about this book is that it takes place a generation after the Civil War.  As far as civil rights and politics go, it’s definitely an unusual time period- at least, in my experience with middle grade/YA historical fiction.  I really love it when historical fiction focuses on something I’ve never heard about, because I also want to learn more, and this book is no exception to that.

I don’t know much about the South during that time period, but I really liked seeing how Moses dealt with his family, friends, and people in Wilmington, and how aware he was of what had happened, and what was going on.  It really is a good look at what someone’s life might have been like during that time.  I could picture everything so well, and there is a lot of detail.

It did start off slow, and it took awhile to get to the actual riots and events of what happened that year.  It made it hard to get into at first, because I wasn’t sure where things were going, but I did like that we saw what things were like before this happened.  I also LOVED that there was an author’s note at the end of the book, explaining what happened and where the author got her inspiration for the book.  It doesn’t seem too common in middle grade/YA historical fiction, so it was nice to hear it.

I thought it was fine as an audio book, and the narrator…he fit, and yet he didn’t.  I did feel like there wasn’t much variation in his tone- there was something sort of monotone about his voice, and I couldn’t listen to it in the car, because something about  his voice was very soothing, and kind of made me want to sleep, which isn’t good when you’re trying to drive.  Yet I could picture him as a 12-year-old boy.

Overall, I really liked Crow, and I feel inspired to learn more about what happened in Wilmington in 1898.  I have mixed feelings about the narrator but overall, I liked the narration too.  Crow gets 4 stars.