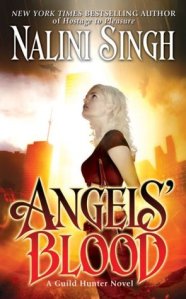 Vampire hunter Elena Deveraux knows she is the best- but she does not know if even she is good enough for this job. Hired by the dangerously beautiful archangel Raphael, a being so lethal that no mortal wants his attention, Elena knows failure is not an option—even if the task is impossible.

Because this time, it’s not a wayward vamp she has to track. It’s an archangel gone bad.

The job will put Elena in the midst of a killing spree like no other—and pull her to the razor’s edge of passion. Even if the hunt does not destroy her, succumbing to Raphael’s seductive touch just might. For when archangels play, mortals break.

I’ve heard so many good things about this series, and I can’t believe I took so long to read it!

I also need to read adult romance more, because I always enjoy them every single time I read them…

Back to Angels’ Blood though.  I tend to stick to historical romance, but I veered away from that because I was in the mood for paranormal romance.  I like that Elena is a vampire-hunter who has to hunt down an archangel.  And there’s no war between heaven and hell and the angels we meet are a pretty diverse group of angels, which was pretty awesome.  And Archangels creating a certain number of vampires a year is really different than any other angel/vampire book I’ve read.

I love this story, and I can’t wait to keep reading the rest of the series, especially with how the book ended!  I don’t know why I didn’t see that coming.  Seriously, I should have seen that coming.  I wasn’t as enthused about the characters, but I still liked them, even though I wasn’t pulled into their story (particularly Elena and Raphael).  There’s definitely an interesting assortment of characters.

And the romance!  Raphael!  I heart him.  He’s definitely in my top ten favorite swoon-worthy characters.  I didn’t completely love their romance (the flirting and sexual tension was awesome, but…sexy times?  Not so much.  Fingers crossed that it’ll get better).  It wasn’t as romance-y as I thought it would be, and I don’t know if it’s because I’m more used to YA romance and historical romance, or if it’ll get more romance-y as the series goes on.

Angels’ Blood was fun to read, and I can’t wait to read the rest of the series.  It’s definitely different than any other angel book I’ve read, but in a good way!  Angels’ Blood gets 4 stars.