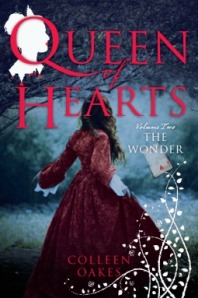 Expected Publication is September 23, 2014 by Sparkpress|Expected Number Of Pages: 238

Where I Got It: read on the kindle app, via netgalley.com.  This hasn’t influenced my review in any way.  Promise!

Series: The Queen Of Hearts Saga #2

Genre: YA Fantasy/Alice In Wonderland Re-telling

An Exiled Princess.
An Ancient Tribe.
A Dangerous Stranger with Unknown Loyalties.

Dinah, the former Princess of Wonderland Palace, has been chased into the wilds of Wonderland after the brutal murder of her brother and the ruin of her impending crown. Now, as her half-sister Vittiore sits on the throne beside her Father, the brutal King of Hearts, Dinah finds herself alone in the forbidding Twisted Wood with only Morte, a homicidal beast, for company.

Hunted by the King and his army of Cards, Dinah struggles to evade those who long for her head, including Cheshire, the King’s clever advisor, who is slowly tightening his grasp around her. Spurred on by her rising terror, the former Princess finds herself at the center of a web of conspiracy reaching far beyond the Palace and deep into the mysterious Yurkei mountain tribes.

Even with the balance of an entire Kingdom at stake, Dinah knows something that her allies and enemies do not: that the most dangerous conflict of all has already begun as she battles the enticing rage that beckons her ever closer as love slips further from her grasp.

The second book in the bestselling and award-winning Queen of Hearts Saga, The Wonder takes readers back to the most wondrous and curious places in Wonderland, and continues this darkly addictive tale featuring one of the most infamous villains of all time.

But be warned…not every fairy tale has a happy ending.

This is the story of a princess who became a villain.

I am such a fan of this series!  I love seeing Dinah and her journey to becoming Queen Of Hearts.  This is such a dark book, but I loved seeing a different part of Wonderland in this book.  It really is a vivid, dark place than you’d ever think possible, and I like that we’re getting the story of a villain and their path to become the villain we all know from the book.

There are quite a few things we learn in this book, and everything started making so much more sense- things definitely start falling into place, and this book is where Dinah goes from scared girl we see in the first book to the young women determined to take back the throne we see in this one.  She’s really changed, and her journey is far from over.

Some of my suspicions from The Crown were revealed in this one, and there’s so much more I want to know…like, I’m pretty sure that some of what we learn will have a huge impact on Dinah in the next book, but what we have yet to find out are the details.  I just don’t know how to talk about things while not giving anything away, so I’ll have to settle for being vague for the moment.

I really do feel for Dinah, and she’s such a sympathetic character.  And Morte!  He’s really taken me by surprise, and he’s a great character.  And the Yurkei and the Spades…there are so many characters I really feel for, and I don’t blame them for acting the way they do.  I’d feel the same way if I were them.  I really do feel like I understand the characters a lot better- even the ones I still don’t like!

I’m really excited for the next book, and I can’t for it to come out!

I really do like this series!  It’s such a different take on Alice In Wonderland, and Oakes does such a great job at making you root for some characters and hate other characters.  I love how dark it is and how you can see so easily how a character becomes a villain.  The Wonder gets 4 stars.