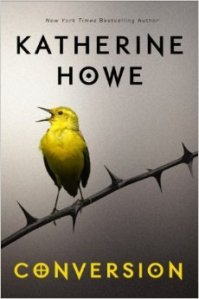 Where I Got It/Format: a print copy from Barnes & Noble

Genre: YA Contemporary Thriller with a splash of historical fiction

From the New York Times bestselling author of The Physick Book of Deliverance Dane comes a chilling mystery—Prepmeets The Crucible.

It’s senior year at St. Joan’s Academy, and school is a pressure cooker. College applications, the battle for valedictorian, deciphering boys’ texts: Through it all, Colleen Rowley and her friends are expected to keep it together. Until they can’t.

Soon the media descends on Danvers, Massachusetts, as everyone scrambles to find something, or someone, to blame. Pollution? Stress? Or are the girls faking? Only Colleen—who’s been reading The Crucible for extra credit—comes to realize what nobody else has: Danvers was once Salem Village, where another group of girls suffered from a similarly bizarre epidemic three centuries ago…

Inspired by true events—from seventeenth-century colonial life to the halls of a modern-day high school—Conversion casts a spell. With her signature wit and passion, New York Times bestselling author Katherine Howe delivers an exciting and suspenseful novel, a chilling mystery that raises the question, what’s really happening to the girls at St. Joan’s?

I really liked Conversion!  What’s really interesting about Conversion is that it’s inspired by a real-life event- one that seems vaguely familiar.

I really liked the progression of what caused the Mystery Illness- from a reaction to the HPV vaccine, to weird symptoms that pop up after having strep throat to possibly Tourette’s to environmental concerns before the actually diagnosed conversion disorder.  I liked how everything came together, but there were times I got really frustrated at the characters and some of the events!

I’m actually really curious as to how the school nurse became the spokesperson for St. Joan’s.  That’s really how it came across, and while I understand her role in things, given she’s a nurse and there’s this mysterious illness, it also got to the point where it seemed really odd.  Weren’t there other school officials who could make statements?  Then again…she also seemed to be approached to write a book about what was going on, and as the book went on, someone would come out as the one writing a tell-all book about the odd goings on at this school.

There was one point in the book (where the environmental factors were brought up), where I seriously stopped reading, looked at the book, and wondered this: “Seriously?  Where are we, Night Vale?”  Some of the parents reported a glow coming from the athletic fields…and I know it’s ripped from the headlines and all, but I couldn’t help but wonder if the glow cloud has a distant relative in Danvers.

I’m not trying to make light of what these students went through, and I get how concerned the parents are.  I know it’s frustrating that they didn’t get the answers they wanted in the way they wanted.  It just brings up so many questions and thoughts for me.  At what point do we stop blaming the school, and at what point do we start going to the Department of Public Health for help on figuring this out?  Why is the school nurse the one who’s appearing on t.v., and why didn’t the school seem to be the ones bringing in experts?

More importantly: what about the pressure we put on ourselves, to the point that we exhibit physical symptoms?  It makes me sad that these girls are under so much pressure and stress themselves out to the point that they lose their hair and have verbal tics and can’t walk and swallow pins but can’t remember swallowing them in the first place.

As far as the Salem Village interludes, I wasn’t sure about it at first.  It’s one of those things that become really clear by the end of the book, and I liked the parallel because two events- one several hundred years in the past, and one that happened recently. It’s strange how looking back, it seems crazy and that in the 1690’s, it really was seen as witchcraft/the devil’s work.  And how several hundred years later, mystery symptoms start appearing, and parents are sure that something is physically wrong with their daughters.  To a certain extent, it was, but in the book, the physical symptoms were a manifestation of stress.  I thought she did great at showing how time and technology can change things.

I have so many more thoughts about Conversion, but this review is a lot longer than I ever expected it to be! My thoughts are still sort of scattered and all over the place, but I really liked Conversion.  There were times when I expected more connections between Salem and Danvers, and there were a couple things that I wish were explored more that felt a little glossed over, but overall, it’s a really interesting read.  Conversion gets 4 stars.