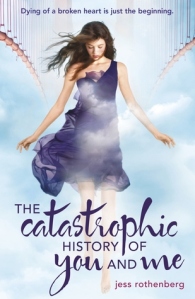 Book: The Catastrophic History Of You And Me by Jess Rothenberg, narrated by Suzy Jackson

Brie’s life ends at sixteen: Her boyfriend tells her he doesn’t love her, and the news breaks her heart–“literally.”

But now that she’s D&G (dead and gone), Brie is about to discover that love is way more complicated than she ever imagined. Back in Half Moon Bay, her family has begun to unravel. Her best friend has been keeping a secret about Jacob, the boy Brie loved and lost–and the truth behind his shattering betrayal. And then there’s Patrick, Brie’s mysterious new guide and resident Lost Soul…who just might hold the key to her “forever after.”

With Patrick’s help, Brie will have to pass through the five stages of grief before she’s ready to move on. But how do you begin again, when your heart is still in pieces?

I started off really liking The Catastrophic History of You And Me, but as the book went on…I found myself getting really irritated with Brie.  Which turned an enjoyable read into an okay one.

I like the idea of Brie having to go through the 5 stages of grief in order to move on.  I actually found it totally believable that the dead grieve the same way we do.  I really liked the connection between her and Patrick and how it was slowly revealed over the course of the book.

Her journey is an interesting one, and while I understand why Brie acts the way she does, there were points during her journey where I started to lose a lot of sympathy for her.  She did come across as petty and bitter and intent on revenge at times.  And while I understand her actions because the people who she thought cared about her had a lot of secrets and things to work through…there were a couple times where she went too far, and I didn’t find her as sympathetic as I did at the beginning of the book.  It really did change how I felt towards her, and not in a good way.  Still, she did act how you’d expect, and she’s a pretty realistic character.  I think teenage me would have related to her and like her a lot more than adult me.

As for her romance with Patrick…I get their connection, but it was never completely there for me.  It did make the novel slightly more interesting, but it also felt a bit random.  I just wish I got to know Patrick better.

I thought Jackson did a great job narrating and I can totally picture her as Brie.  Brie’s sense of humor and personality really came through in Jackson’s narration.

Catastrophic History turned out to be an okay read for me, and it’s because Brie eventually got too irritating for my taste.  I think teenage me would have really liked her but as an adult…not so much.  Still, I think the idea of an afterlife where you have to go through the stages of grief is a really different and unique one.  The Catastrophic History Of You And Me gets 2 stars.