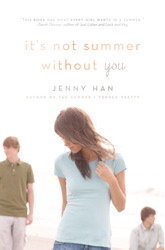 Book: It’s Not Summer Without You by Jenny Han

Goodreads Summary: Can summer be truly summer without Cousins Beach?

It used to be that Belly counted the days until summer, until she was back at Cousins Beach with Conrad and Jeremiah. But not this year. Not after Susannah got sick again and Conrad stopped caring. Everything that was right and good has fallen apart, leaving Belly wishing summer would never come.

But when Jeremiah calls saying Conrad has disappeared, Belly knows what she must do to make things right again. And it can only happen back at the beach house, the three of them together, the way things used to be. If this summer really and truly is the last summer, it should end the way it started–at Cousins Beach.

I just LOVED It’s Not Summer Without You!  I knew it would be completely amazing when I started crying by, like, 10 pages in. Belly’s story continues a year after The Summer I Turned Pretty (henceforth known as TSITP), with another summer that is happening at home, and not at Cousins Beach.

I loved It’s Not Summer Without You (AKA INSWY) so much more than TSITP.  Belly has changed quite a bit since last summer, and with Susannah being sick and everything that happened with Conrad…you see everything that’s happened since the end of TSITP in flashbacks, and how it led to the events of INSWY, and I liked that we got those flashbacks of what happened.

A big part of the book is the death of Susannah, and you REALLY feel it in INSWY.  You really do, and you see how all of the characters are dealing with it…and it’s why summer just feels so different.

Another reason why this book is different than the first is that part of the book is narrated by Jeremiah. I actually really liked it, and I liked having a different perspective on things and how/when he started to fall for Belly.  It’s so weird, though, because the first book, I wanted him and Belly to end up together but in this book, I wanted her to be with Conrad, so it’s quite the conundrum for Belly in terms of romance.  Jeremiah really is the better guy, but I also like the the glimpses of who Conrad really is.  You know, behind all the angst and stuff.  I have no clue who I want Belly to be with.  Jeremiah’s great, but I think she’ll always love Conrad, and I have the feeling she may end up with him.  But…it really could go either way, so we’ll have to wait and see in the next one for that.

I felt so nostalgic while reading It’s Not Summer Without You, which is another reason why I loved it so much.  I just kept thinking of my summer vacations, and for whatever reason, I feel like I read it at the right time.  Like, when I read it, I needed to read something like it, even though I didn’t know it was what I needed at the time.  Does that make sense?  Because I’m feeling like that doesn’t make a lot of sense.  Still, I love the nostalgia I felt when I read it.

It feels weird to start the year off with such a special book, but that’s exactly what It’s Not Summer Without You is!  I loved it even more than The Summer I Turned Pretty, and while I was so sad for a lot of the characters, I also loved seeing one last summer at Cousins Beach…even though I have the feeling we’ll be going there again in the next book.  It’s Not Summer Without You gets 5+ stars.