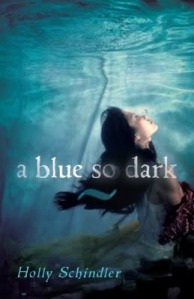 Book:  A Blue So Dark by Holly Schindler

Part of a series? No

Goodreads.com Summary: Fifteen-year-old Aura Ambrose has been hiding a secret. Her mother, a talented artist and art teacher, is slowly being consumed by schizophrenia, and Aura has been her sole caretaker ever since Aura’s dad left them. Convinced that “creative” equals crazy, Aura shuns her own artistic talent. But as her mother sinks deeper into the darkness of mental illness, the hunger for a creative outlet draws Aura toward the depths of her imagination. Just as desperation threatens to swallow her whole, Aura discovers that art, love, and family are profoundly linked—and together may offer an escape from her fears.

The plot: The connection between creativity and mental illness is one that’s pretty interesting.  There were times when things were predictable- like when Aura’s boss at her part-time job turned out to be her grandmother.  Or her mom getting help and acting perfectly fine after what seems like a month of treatment.  That, to, me didn’t seem too realistic. However, I liked that her mom was schizophrenic and not depressed, which is what I’d expect.  Also predictable?  Aura being okay with her interest in art in the end.

The characters: I didn’t really care for Aura’s mom, grandma or dad.  But I did like Aura.  I liked seeing Aura struggle with her own creativity because of her mom.  Aura’s artistic talents seemed similar to her mom’s, in that they both drew and painted and whatnot.  I like that there’s that connection between them, but it was also irritating because I would have liked Aura to be creative in a different way than her mom.

Other Thoughts: I didn’t really like how no one seemed to notice or care that Aura was the one taking care of her mom.  Like, she gets called into the counselor’s office, who didn’t even ask if anything was going on at home.  Granted, they do call her home quite a few times, it’s almost like there was no effort to call her dad.  I get why Aura didn’t tell anyone, and I’m not sure she would have told her counselor, even if she had been asked about her home life.  Is this reality for some kids out there?  Sure.  I could relate to Aura in some ways, and overall, she was pretty likeable.

I liked A Blue So Dark, but not as much as I thought.  It was a little predictable at times, and some things just didn’t fit.  But the connection between mental illness and creativity is a pretty interesting idea, and I did like the parallels between Aura’s creativity and how creative her mom and grandma are.  It gets 3 stars.