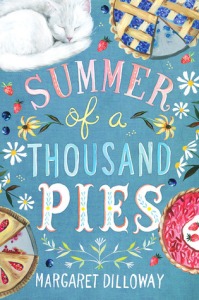 Book: Summer Of A Thousand Pies by Margaret Dilloway

When twelve-year-old Cady Bennett is sent to live with the aunt she didn’t even know she had in the quaint mountain town of Julian, she doesn’t know what to expect. Cady isn’t used to stability, or even living inside, after growing up homeless in San Diego with her dad.

Now she’s staying in her mother’s old room, exploring the countryside filled with apple orchards and pie shops, making friends, and working in Aunt Shell’s own pie shop—and soon, Cady starts to feel like she belongs. Then she finds out that Aunt Shell’s pie shop is failing. Saving the business and protecting the first place she’s ever really felt safe will take everything she’s learned and the help of all her new friends. But are there some things even the perfect pie just can’t fix?

Summer Of A Thousand Pies is a super-cute middle grade, and I really liked it!

Definitely don’t read this while hungry, because the book is centered around a pie shop.  I was super tempted to actually drive to Julian to get some apple pie…maybe one of these days, I’ll make the drive up there for pie.  I love that the book is set in Julian, and that it’s about pie.  I mean, when I hear Julian, I think of apple pie, and it’s only about an hour or so drive for me, so I really will have to one of these days.

I didn’t like Cady at first, but she grew on me.  She didn’t seem to have the most stable living situation, and I definitely understand why she acted the way she did.  Cady didn’t have a safe space, and with what we learn about her mom and dad, I can understand why she’d think that it might get taken away.  And with everything going on with the pie shop her aunt has…Cady has a lot going on.  I’d probably act the same way if I were her.

I loved the moment when the title made sense, and the title was one of the things that drew me to the book.  Plus, that cover is really cute, and it makes me think of a hand-lettered sign you’d see hanging up in a pie shop or one of those signs you’d see on the sidewalk outside.

Also cool was the recipes at the end of the book!  I had to return the book to the library so I didn’t even think to make any of the pies at the back of the book, but maybe when it starts to cool down a little, I’ll get the book so I can try them out.

I really liked the relationships they had with some of the customers and business owners.  They really came together to help out the shop when it was needed and there’s a sense of community that they have.  It was nice to see, and I hope things work out for all of these fictional characters.

4 stars.  Summer Of A Thousand Pies is really cute, and I loved seeing Cady open up and have a little more stability.  I also loved that it was about pies and baking and seeing Cady experiment with different pies was really fun too!