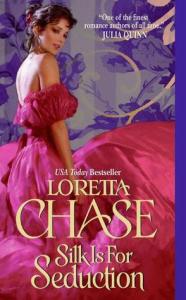 Book: Silk Is For Seduction by Loretta Chase

From the Design Book of Marcelline Noirot:
The allure of the perfect gown should be twofold:
ladies would die to wear it…and gentlemen would kill to remove it!

Brilliant and ambitious dressmaker Marcelline Noirot is London’s rising star. And who better to benefit from her talent than the worst-dressed lady in the ton, the Duke of Clevedon’s intended bride? Winning the future duchess’s patronage means prestige and fortune for Marcelline and her sisters. To get to the lady, though, Marcelline must win over Clevedon, whose standards are as high as his morals are…not.

The prize seems well worth the risk—but this time Marcelline’s met her match. Clevedon can design a seduction as irresistible as her dresses; and what begins as a flicker of desire between two of the most passionately stubborn charmers in London soon ignites into a delicious inferno…and a blazing scandal.

I liked this one!  I’m on a romance kick right now, and this seemed like a good one to read.  I really like Loretta Chase, and it was no surprise that I liked this one.

I really liked Marcelline but I don’t know that I liked her with Clevedon.  I felt like we saw a lot more of Marcelline than Clevedon, and I felt like this book was more about Marcelline and her up-and-coming dress shop than it was about the romance between her Clevedon.

I think part of why I didn’t like them together was the fact that there was someone he was intended to marry, and Marcelline did everything she could to get to him so she could dress this really important person.  I mean, it brought them together, of course, and there are all of these obstacles, but I just wasn’t a fan of them as a couple.  Clevedon was what I expected but…he’s not my favorite romance novel hero.

Not that I could pick a favorite, because I don’t think I could.  But he just didn’t do anything for me.  Just…even though he wasn’t actually engaged to someone he thought of as a sister…I don’t know, I just couldn’t get behind them knowing he was supposed to eventually get married to someone and ignored that in favor of his own needs.  It just made it hard to care and root for them.

I did want Marcelline to be a really successful shop owner and dressmaker, and I did find myself rooting for her to actually make it.  I wanted her to be able to take care of her sisters and daughter, and she’s well on her way to doing that, I think.  We’ll see, though, because this is only the first in a series.  I’m curious to see how things turn out for them, and even though I know the following books won’t focus on them, I’m sure both Marcelline and Clevedon will make an appearance.

3 stars.  I liked it, and Marcelline is a great character.  I just wasn’t a fan of the romance in this one.

2 thoughts on “Book Review: Silk Is For Seduction by Loretta Chase”