Nail Polish Talk is a once-a-month feature where I talk about the nail polish I wore and bought that month.

I wore Linden by Julep, which I really liked!  It reminded me of a pool of water (really, any body of water), and it was darker and more grey than I expected.  It looked a little bit lighter in the bottle and slightly different on the website (which I never fully trust, because it could just be my computer screen).  And it did go on a little thick, but it did even itself out after a couple of coats.

I really like Jacqueline!  It definitely lives up to the description of bright grenadine shimmer, and it’s really pretty and bright, and I just want to look at it all the time because it’s so pretty.  Never have I wanted to repeat a color more than this one!  It’s a good summer color, but it would also add a nice splash of color during the fall or winter (especially if you live in a place that actually has seasons).

Joyce is such a good Christmas red!  And a few days in, I remember I was going to wait until around Christmas time to wear it, but it’s too late for that now.  (I do have a few other reds that will work for Christmas, so it’s not too bad). But it is a pretty red, and for whatever reason, I was in the mood for this shade of red.

This is one of my favorite colors- I kind of forgot how pretty and spring/summer-y it was until I wore it.  It did go on a little thick and goopy (more than I remembered) and the first coat was a little streaky, but that evened itself out with a 2nd coat.

I opted for the mystery box (which caught my eye after not liking any of the nail polish/beauty products offered, and kept me from skipping this month).  I also got a couple of add-ons, which I don’t normally do, but I had some Jules (their rewards points system)  saved up, so I used it for that. 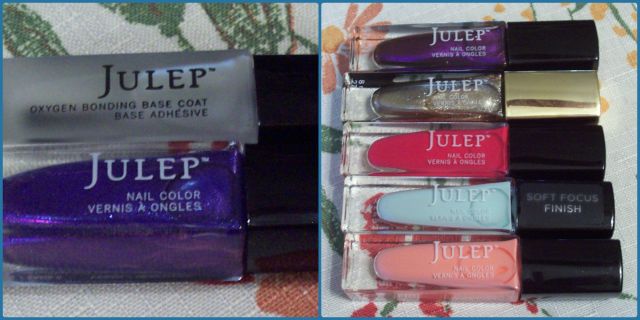 First, the mystery box.  This is the 2nd mystery box I got from them, and I was pleasantly surprised!  I was nervous going in, because I had no idea what colors I was getting.  So I wasn’t sure if I’d get any duplicates (just one) or if I’d get colors I liked.

This month’s box had 5 colors:

Looking Ahead At The August Maven Box:

I skipped the August box because while I liked a couple of the colors, I don’t know that I liked them enough to get the box.