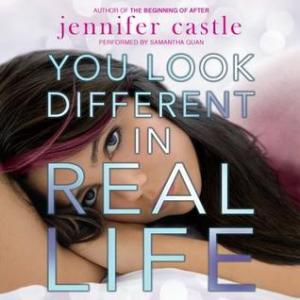 Where I Got It: Audible.com

For the rest of the world, the movies are entertainment. For Justine, they’re real life.

Now sixteen, Justine doesn’t feel like a star anymore. In fact, when she hears the crew has gotten the green light to film Five at Sixteen, all she feels is dread. The kids who shared the same table in kindergarten have become teenagers who hardly know one another. And Justine, who was so funny and edgy in the first two movies, feels like a disappointment.

But these teens have a bond that goes deeper than what’s on film. They’ve all shared the painful details of their lives with countless viewers. They all know how it feels to have fans as well as friends. So when this latest movie gives them the chance to reunite, Justine and her costars are going to take it. Because sometimes, the only way to see yourself is through someone else’s eyes.

Smart, fresh, and frequently funny, You Look Different in Real Life is a piercing novel about life in an age where the lines between what’s personal and what’s public aren’t always clear.

I really like the premise of the book, which is really interesting!  It seems really familiar, and I think there’s an actual series of documentaries focusing on a group of people throughout their lives.  I liked seeing these kids who used to be friends deal with being friends and having to be around each other.  It really does highlight what it’s like to be in the spotlight, and to have your life out there for the world to see.

I didn’t particularly care for Justine- of the 5 kids, she was the least interesting to me, and while the story unfolded before her eyes, I just didn’t care for her story.  The other kids had some things to work through, and she’s the one who didn’t really seem to have anything to work through.  I mean, she did, because life at 16 didn’t seem to be what she hoped it would be, but in comparison to Rory, who’s on the autism spectrum, Keira, who’s mom walked out on her family, Nate, who used to be bullied, and Felix, who’s gay, but not out and the son of immigrants (well, I think that’s his family back story- I can’t remember if it was specifically stated, but at the very least, English seemed to be his parents second language)…Justine’s story seems to pale in comparison.

With such a large cast of characters, each one did have their own story, which kind of surprised me, because you’d think they wouldn’t stand out.  At the same time, though, with 5 different stories, each kid didn’t get a fully developed story.

Overall, the story of You Look Different was super predictable- the characters were what I expected, and the story also turned out how I expected.  For the most part, I didn’t mind, because I liked seeing Justine’s memories of the other kids and how they interacted with each other.  I also liked seeing how some of them worked things out by the end of the book.

The other thing that was too predictable in a fake kind of way was Felix…him being gay felt like it was in the book just for the sake of being in there.  I get he didn’t want to admit that he was gay, and that it would cause major problems with his parents- it is a story that needs to be told and I have no doubt that it’s likely a story a lot of kids could relate to, but it really did feel like it was there just to be there, and for me, that took away from it.

I do wish that we had an occasional chapter from one of the other kids- I know that Justine is narrating, and we see them through her eyes, but I think it’s a book that could have used a different perspective every once in a while.  And I would have liked to see Justine through someone else’s eyes.  Still, she does seem content to let things unfold around her and just observe.

As far as the audio goes, I thought Quan did fine with narrating the book- to be honest, her narration wasn’t something I paid a lot of attention to.  There are flashbacks and memories, but I felt like that was a little too confusing to actually listen to at times.

I really did like You Look Different.  Castle has a talent for making characters compelling, even when they aren’t the main focus of the book.  There were a few things I didn’t like, which took away from the book a little, but overall, it’s an interesting read.  You Look Different In Real Life gets 4 stars.